I think the ipad creates a new blue ocean.

Yesterday Apple announced the ipad with the highest expectations ever in the market. Everybody was guessing and predicting how it would look like and was looking for some missing features and the hair in the soup.
I was really excited about the name ipad (even if they made some jokes about the itampon in US) it is short and brings it to the point. The first tweets I read about it were regarding missing features like: no webcam, no 3G, no multitasking etc. and I also started doubting if this was a good idea from Steve Jobs after his great success with the iphone and that we saw already Apples peak time.

Later on we attended an iphone meetup together with many iphone developers and had an open discussion about the ipad. This discussion changed my mind completely. Now I see the ipad as my new 4th device, beside my iphone, laptop and TV screen.
It will not replace my laptop or iphone but partly my TV and for sure any newspapers, books and magazines, my cookbook, text book, remote controls of my house, console to play on my couch etc.

But the most important target group for the ipad is not me, a computer nerd. The ipad creates a completely new market to use a computer for people who are not comfortable with small buttons, mouses and operation systems in situations, where it doesn't fit. Now my grandma can watch pictures, read her newspaper and movies... on a computer. It is a bit like the wii reinvented the gaming market and opened it up for new target groups who never played a computer game before.

On top of it, the ipad is the fastest computer experience I've ever seen. Switch it on like a radio and use it immediately. Forget waiting times for booting or starting of programs. It looked so natural in using, that you just use it when you need it. It reminds me the time, when I switched from dial-in to flat rate Internet - don't think about, just do it. 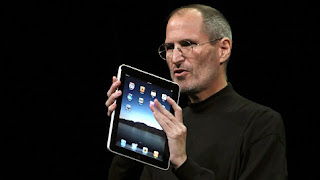 So that brings me to the point, that we are talking about a revolution where the ipad creates a new blue ocean - which I really appreciate ;-) That's why I'm going to buy an ipad as soon as it is available!
Thank you Steve
Posted by FamilieHessler at 2:33 PM 1 comment: