Yesterday Nina and I went from Saint Martin to Miami. As a result of the foiled terrorist attack we were subject to 2 screenings. One was the already extensive screening that US airports do that are already intense, shoes off and all. But after that we went through another painful passenger by passenger screening that resulted in a 90 minute delay for the flight. Every passenger was searched an average of 2 minutes by 2 security people divided into male and female passenger. This included intense searches on passengers in wheel chairs and people of all ages included very elderly passengers.

As I observed this process I could not stop thinking that there must be a better and faster way of dealing with periods of high alert like the one we are going through now right in the middle of the holiday season. So this what came to mind.

The plan would be that in the waiting lounge, before boarding, with all passengers there, airline personnel organize say 20 groups of 10 passengers each. It is important that the assignment be done randomly by airline employees. One way would be to use seat assignments. Then after this groups are formed two leaders would be chosen in each group based on the passengers with the most miles. Then in each group passengers would introduce each other and leaders would ask whatever questions they find reasonable in order to conclude if the members of her/his group are safe to fly with. If they see anything out of the ordinary they would refer the passenger to security for further questioning.

-passengers have skin in the game. Security personnel stays on the ground.

-it is much faster. 2 people screen 200 passengers for 2 minutes each in 200 minutes. This process should not take more than 15 minutes, possibly 5.

- this is on top of current security, it is one more layer of security.

-many terrorist attacks are stopped by fellow passengers.

-with all respect to the privately hired security forces that screen passengers around airports it is likely that the average well traveled passenger is smarter than the average newly hired private security employee.

-as opposed to Israeli screening methods which are considered best in the world and involved extensive, random interviewing current security does not involve conversations. It is through conversation and normal human interaction that a person who is about to blow up a plane with whatever method may be discovered.

The P2P screening idea is one of those projects like Wikipedia, that believes that collective intelligence is g...

Sent from my iPhone
Posted by FamilieHessler at 9:38 AM No comments: 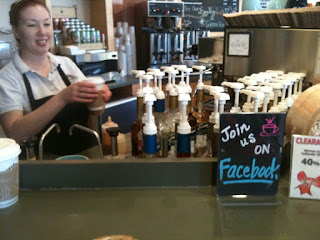 If you think socialmedia is only important for big companies, look at
this picture. This I have seen here in the Valley already at
supermarkets, my butcher an coffee shops like this clocktower:

Posted by FamilieHessler at 10:51 PM No comments: