How to get out of London without Heathrow? #cab #train #ferry #christmas at home

We made it in 36 hours from London to Berlin, starting at Monday 7am.
So if you still stuck in London without a chance of a flight, you maybe can make it home for christmas like we did. 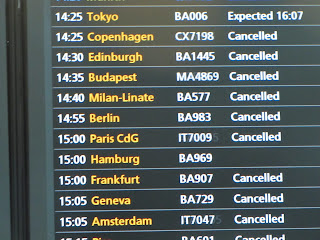 Here comes how we did it and what else we found out:
- First of all forget your luagge and bags at Heathrow and tell your destination airport your numbers - they will send it to you in the next days (hopefully ;).
- Second: Even if we had booked another flight out of London, we decided for an alternative which we could control and not are totally dependend on the weather or Heathrow airport

London
We decided to leave London via cab, after we saw the chaos at the kings cross train station. There was a huge waiting line on the street from people with tickets for the eurostar. But now they even dont sell tickets anymore. Our plan was to get on a train to dover with: http://www.nationalrail.co.uk/
The cab was 200 pounds to dover, but train tickets for family of 5 would have cost about 140, so it was a good compromise and a lot of fun with the cab driver who drove us to his favourite breakfest place "Bernis Sandwich Bar" in London.

Dover
The ferry to calais was easy, after we realized we have to buy the tickets at the door, because they dont allow foot passengers to buy tickets online: http://www.poferries.com/
Tickets for 5 cost us 90 pounds

Calais
Here comes the hardest part!
We got luck and catched one of the last rental cars from europcar, but dont ask for the price, it's "highway robbery". But if you would like to try, here is the number:  +49 1805800
Because of the price, we change the car next day in Duesseldorf with sixt +49 1805252525
We also found a second way to get out, via cab to one of the next bigger citys and then get a rental car there, but meanwhile you probably have to go abou 100km, because its hard to find a
An alternative to get out is by train http://www.raileurope.co.uk/

Duesseldorf
From here it's a childsplay, beside the weather and road conditions. We stopped one night in Belgien (Hasselts) they have a nice christmas market and good hotels.

We which you good luck and merry christmas 2010


Thanks to this people and websites, who helped us to get home:
@mdbergfeld  - He is an TwitterAngel, he tweeted his experience and responded to my tweets.
Hausecke - He was my realtime researcher and road advisor.
Berne - He helped me to book hotel and flight.
http://www.seat61.com/ - great travel website
http://search.twitter.com/ - real time news

Posted by FamilieHessler at 10:19 PM

Glad you made it, Thomas. Happy Xmas to you and your family!!!
Tim